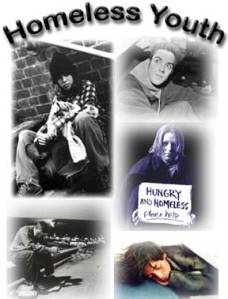 Courtesy of LEAGUE OF WOMEN VOTERS® OF ROGUE VALLEY

We have a crisis in the United States that seems to fly under the radar, runaway and homeless youth.  While trying to get some hard statistics to show the problem, what I have gathered is that no one really knows how many youth are homeless or runaways.  I have seen statistics from the National Alliance to End Homelessness that indicate a number of about 550,000, while a 2002 estimate from the Office of Juvenile Justice and Delinquency Prevention said 1.6 million, and a 1995 study of runaway youth done by the Research Triangle Institute said 2.8 million youth had runaway the previous year (http://www.1800runaway.org/faq/#18).  What we do know is that it is a problem.  This problem first got acknowledged forty years ago in 1974 with the Runaway and Homeless Youth Act (RHYA).

That act for the first time created a safety net for youth who had run away from home, were asked to leave their home, or became homeless in other ways. According to The National Network for Youth (nn4y) “The Runaway and Homeless Youth Act (RHYA) programs provide youth with a stable foundation from which they can connect with services, reunify with their families or develop the skills needed to live independently. RHYA grantees help youth to achieve education and employment goals set by the youth. RHYA programs work to address the needs of homeless youth.”  However, the problem of limited resources is an issue.  Youth are being turned away from programs and organizations due to lack of funds.  “Between 2008 and 2012, approximately 37,000 youth were turned away from Basic Center and Transitional Living programs, which work to reunify youth with their family, provide shelter and other services such as counseling.” (http://www.nn4youth.org/public-policy/policy-platform/rhya-appropriations . 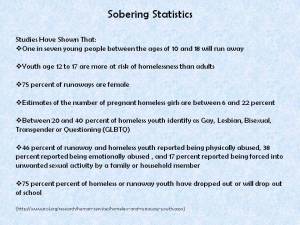 November is National Runaway and Homeless Youth Awareness Month.  In 2002, leaders from across the nation came together at the White House Conference on Exploited and Runaway Children.  Hosted by then president, George W. Bush, the leaders discussed the challenges related to runaways.  This developed into the National Runaway Prevention Week which was eventually lengthened to a month- long awareness campaign.

One organization on the frontlines trying to help these young people in crisis is the National Runaway Safeline.  It was established in 1971 for the youth of Chicago, then known as Metro-Help.  In 1974, it received federal money to create a national hotline, The National Runaway Switchboard.  The name change came in 2013 when it was recognized that the youth of today do not connect to the term “switchboard” any longer.  Their mission is a simple one, “to keep America’s runaway, homeless and at-risk youth safe and off the streets”.

The organization tries to help in a variety of ways; however, the most important thing is the fact that they (the staff and trained volunteers) are on the other end of the phone line to help.  That help can come in the form of making arrangements for shelter, relaying messages to or from a parent or friend, making arrangements to return home, or even filing abuse reports.  These people are a critical lifeline to those young people who find themselves on the street.

We know the risks of being on the street: the risk of human trafficking, a higher risk of drug and alcohol abuse, and risks of unprotected sex which could be in exchange for food, clothing or shelter.  Of course, all those things lead to lower self-esteem, depression, and risk of suicide.  Life for these youth simply is not normal.

This is not just an American problem.  In every country in every corner of the world, we have youth who are at risk.  I highlighted one organization in the U.S. trying to help but please look into what you can do in your own community to help these children/young adults, so that they in turn might be able to pay it forward.

For more information or to donate to the National Runaway Safeline, you can click here.