In a typical year six to nine storms make landfall in the Philippines, but Typhoon Haiyan has been the worst in history.  Thousands have died, millions have been affected, and the true measure of the storm will not be known for some time.  Nations around the world are coming together to try to make sure that more suffering does not occur due to lack of clean water, medical supplies, and sanitation.

I was asked by a friend to research what charities might be the best for helping the victims of Typhoon Haiyan.  So I said I would do some digging.  All the big charities Red Cross, International Rescue Committee, Mercy Corps, International  Medical Corps, etc. have hit the ground running.  I am really not sure that there is a “better” agency to give to.  It seems that the big NGOs and the UN are trying to coordinate efforts in a situation that is proving to be a logistical nightmare due to transportation issues.

Calls for help are coming from all directions and it is difficult to decide which organizations are worthwhile.  Charity Navigator has come up with a list of agencies that seems useful.  All charities on that list have directly stated that all donations received specifically for the Philippines will not be diverted to other areas.  That list can be found here: http://www.charitynavigator.org/index.cfm?bay=content.view&cpid=1659#.UolKgcRJMdX 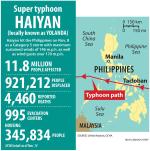 I will highlight a few charities that already have direct connections to the Philippines before this tragedy occurred.

Catholic Relief Services (CRS) is definitely one agency that is already on the ground in the Philippines.   They started working there in 1945 after the Philippines was devastated by World War II.  Being a Catholic country the Philippines has well-established parishes all over its provinces and can stage relief services in schools and churches that have survived the devastation.  CRS is already using a school in Ormoc City as a staging area for 28,000 temporary shelters, hygiene kits, and household items which were coming by boat.  It is estimated that 90% of the city has been destroyed.  Ormoc City is on the other side of Leyte province from Tacloban City which is the capital of the province. Because of being the capital, Tacloban has been heavily featured in the news, however the whole province of Leyte was one of the hardest hit areas because it was directly in the typhoon’s path.  CRS is coordinating with the government, the UN, and other groups to help in the early stages of the relief efforts.  To donate please go to https://secure.crs.org/site/Donation2?df_id=6140&6140.donation=form1&s_src=home-page-interupt

ChildFund International has been in the Philippines since 1954.  As with CRS, they are already in place to help on the ground.  UNICEF has said that ChildFund has been the first to have child-centered spaces up and running in the wake of the disaster.  They are focused on child-centered spaces, health needs, and both food and non-food items.  They have declared that all funds donated will be used specifically for the relief effort.  To donate you can follow this link http://www.childfund.org/emergency/

Additionally, while researching charities I came across another piece of history that most people probably do not know.  During World War II, the Philippines became a safe haven for about 1,000 Jews who would have surely perished during the Holocaust if it had not been for  the American Jewish Joint Distribution Committee (JDC), a Jewish family in Manila, and the Filipino president at the time.  Because of this, JDC feels a deep responsibility to help and give back since Manila was a safe haven for Jews during the Nazi persecution.   Working with its partners CRS (yes the Catholics and the Jews are partners) and Afya Foundation, JDS is aiding the Filipino people in this time of need.  In an Op-Ed piece in JTA (The Global Jewish News Source), CEO Alan H. Gill  states,  “About 30 percent of funds raised will be dedicated to immediate relief for food, water, shelter, medical supplies and care, unless the emergency phase lasts longer because of expanding, critical needs among survivors. The rest will be invested in sustainable local projects that will emerge in the long, slow process of rehabilitation that is sure to come.”   Donations can be made at http://www.jdc.org/where-we-work/asia/philippines-relief.html.

I only highlighted three specific agencies, but I am sure that, no matter where you decide to send a donation, it will be put to good use to help those who have survived this terrible disaster.

Peace be with you all.